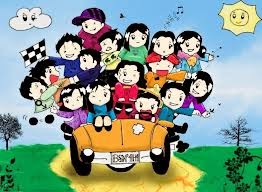 “Hello” said Mridul in sleepy voice; the holidays had made him lethargic.

“Hey! Mridul, guess who is on the line” it was Kanishka, as fresh as the morning.

“Hey Kanu! Sorry I was still sleeping, but you look quite fresh” he was little surprised by her call.

“I wake up at 7oclock every day, not like you fatty” giggled Kanu.

“That’s why you are too gorgeous sweet heart. So, why did the queen call her servant?” flirting as usual.

“Nothing dear…I was getting bored, so thought let’s talk to you and plan an outing”

“Where ma’am? It will be an honor to be your personal guide.” ‘Butler’ could have been his new career.

“Let’s go to Worlds of wonder. Just you and me…” Kanishka paused for a second deliberately.

“Wow just you and I” Mridul nearly jumped out of bed.

“And our friends…off course” chuckled Kanishka.

“Alright ma’am, as you say. Then let me just freshen up and talk to others. Bye dear. “ he felt little ashamed about what he did few seconds ago.

“Bye Mridul” and the conversation ended.

Mridul called his dear friends and persuaded them for the picnic. Prateek were excited about the idea and didn’t take much time to get in act. Parth was not willing to come. Mridul was also excited about it and more about something else.

"Prateek Bhai, Ask Parth to come na. You know why he is required to be there" Prateek understood what Mridul wanted to say.

Prateek had always been a go to person for Mridul. Though he used to speak a lot but was nice at heart. They shared a nice bonding. It might be because of similar mentality or might because they shared a similar post in college. Prateek took the lead to talk to Parth and he succeeded in his task.

After having an oil soaked breakfast, of Aloo Parantha and Butter Mridul was ready to depart when his father interrupted him.

“Mridul when will you get serious about your career? What have you decided about giving second chance to IIT and AIEEE?” His father was concerned about slipshod attitude of his son.