JalliKattu-Here’s what you should know about it: 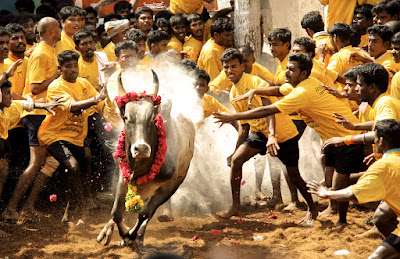 Though the big debate started recently, but actually this beautiful (I should refrain from using this word) sport has bearing with the time of Indus Valley civilisation. A seal was found, preserved in Delhi Museum, depicting a bullfighting practice prevalent during that time.
Someone would have tried taming a high on testosterone, wild and running bull by pulling it, holding its hump and would have succeeded. People must have had got a kind of adrenaline rush and soon it became a competition. A friendly (again let’s refrain) competition with a name “Eru Thazuvuthal”, meaning “Hugging the bull” (That’s why I used the words beautiful and friendly).

During the era of Nayak kings, this competition took reached a new level, where the king used to pack gold coins in a cloth and this cloth was tied to bull’s horn. This bull then used to enter an arena through a makeshift entrance gate “Vaadi Vaasal”. The one who get hold of Bull and stopped it won the competition and those coins were his. And hence the name came JalliKattu-“Jalli” means coin and “Kattu” means knot, hence tied gold coin and of course won a lot of women’s heart.

Centuries have passed but that love, that enthusiasm has not come down and the southern part of India still continues to have this event and some parts of Madurai have become a centre of attraction, where thousands of people come to witness this sporting event. And, yes please don’t compare with the Bull fighting of Spain.

Now let’s talk about what’s happening in India. A ban of Jallikattu has become a rallying point and has been seen as the negation of Tamil Nadu’s heritage and cultural identity. Oh! Yes, the honorary Supreme Court of India has put a ban on this event in 2014 and is not in a mood to go back and change the verdict. Hence this drama (peaceful and hence commendable) is unfolding at Marina Beach and parts of Tamil Nadu (who cares if you are not a metro city, right?).

The honorary Supreme court says that it is a torture on bulls, when the owners, just to increase the intensity of the sport, squeeze lemon in bulls’ eyes, rub red powder on bulls’ genital, or forcefully made them drink alcohol so that they become more voracious. This could lead to either Bull getting hurt (Though only a limited number of bulls take part in this event) or mankind (Though more people die in road rage and in their zeal to do adventure). It sounds logical and hence Supreme Court is honoured in India.

Now let’s talk about what people say, in between all the media hype and exaggeration. According to people, a bull is considered as the animal of the temple and hence respected and would not be hurt at any cost (People are god fearing, I knew this!). Moreover, they give an emotional touch to the argument, stating that these bulls are raised for the sole purpose of breeding and hence safeguarding the native breed against importing breeds from outside India. Banning means that the reason will no longer stand resulting in decline of the bull breeds which have declined from around one hundred thirty odd breeds some hundred years ago to just thirty-seven (I won’t even get into the reason how it may enhance the beef production, a lynching of an unknown blogger in Tamil Nadu, is the last thing you need to see in between all this epic drama).

The debate is not settled yet and we are yet to see in which court will the ball will land and who will have the last laugh. But, if you think I have missed something; request you to tell me by commenting below. Till then keep #discoveringmoreinyou.