The exams were over and as promised by my dad we would be soon leaving for a trip to Manali. Knowing my food crazy nature and also seeing me not having my food properly during exams my mom got up early to prepare some healthy oil soaked food. 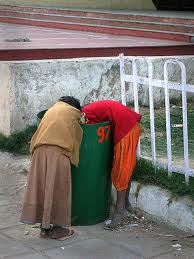 The food was ready, the luggage was ready, the car was ready and so were we to hit the road. It was 8 in the morning when we left and by mistake it was the first time in history we left on time which we decided to leave at (Punctual and my family...forget it J) . The sun was shining over the roof of the car and its heat could be easily felt inside the car running on maximum AC fan speed.
Four hours of continuous travelling and my sister’s road sickness had left nothing inside us and we decided to stop at a restaurant- “Sher-e-Punjab”. A railway track running behind the restaurant touching infinity and the sun playing hide and seek behind the woods. It was a beautiful and soothing to eyes if not to body.
After having food, my father got busy in paying the bill while I was stretching myself to make myself ready for another long drive. During that after brunch exercise, my eyes got stuck to an old man. His filthy clothes and skin peeping ribs could easily explain his appalling life. He was searching for the food in the plate disposal bin, a scene which killed my excitement of the trip.
I wished that I could do something for him, ‘but what?’ I thought. The cheeks had gone wet and this time it was not because of excessive sweating I was dealing with but with the salty tears which became even more salty after extra salty food. It was the first time I felt pain for somebody that deep. 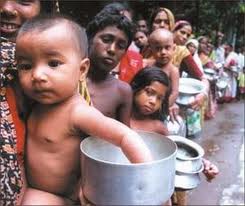 On one side it was me who can’t survive without food for even one day and that person was looking for food in the dustbin. His buffet consisted of slices of onion, pieces of bread and peels of fruit. This is the truth of what we proudly say one of the best BPL proposal. Though I can’t change the system India have but I just helped him with some money, so that he could afford good food for even once.
We left for Manali after that break, but that incidence has pulled each and every colour from the surrounding. The trees were looking dull, the sky was not blue the river Beas was not sparkling. That day imbibed something in me, I am still searching for the answers for the questions I never put forward.
We have lost something, something which requires more than a change...something which requires revolution...
chance food future like lost Love revolution something you